Archive for December, 2008
December 10, 2008 at · Filed under Manual Scavenging
Manuski’s campaign on Manual Scavenging received impetus when the organizations working on the issue decided to campaign in unison against this inhuman practice। On 27th Nov., Director of Navsarjan Trust , Gujrat , Manjulaben and Sanjiv Khudshah,a renowned writer on "Safai Kamgar samuday" and connected with Dalit Movement Association hailing from Chhattisgarh visited Manuski Center, Pune. Various local representatives from Bhangi Community and members of Manuski were present on the occasion. The purpose of the meeting was to know about each other’s work and help in campaigning the issue of Manual scavainging . There was discussion on various subjects like caste identity, how to eradicate this pernicious system of carrying and disposing the human excreta manually. Hon. Manjulaben said that to completely eradicate this scourge, the total change in the psychology of the community involved in this work is required. They must determine that even if they starve, they would not do this work. There are equal number of manual scavengers (65,000) in Gujrat and Maharashtra, but considering the proportion of SC’s of Maharashtra (16.5%) and that of Gujarat (7%), it is
much more in Maharashtra. The cause of the issue is social and economical.
The methods adopted by Navsarjan in Gujarat are surveys, random photography, leadership development in equal number of women meeting of activists with community members, visual documentaries, narration of success stories during talks, lectures and in writings. Navsrajan also fights against cases of atrocities which are filed u/s 3(1)(vi) of P.O.A. about forced labour, the respondent being the corporations and Muncipalties. It also works on occupational disease of T.B. since the scavengers get infected due to this work. The domestic violence is also the issue connected with this problem as the in-laws of the women compel them to do the work of manual scavenging.
Despite all odds, Navsarjan is slowly but steadily working against the system. Inspirational and thought provoking views were expressed by Sanjiv Khudshah, who is related with with Dalit Movement Association in Raipur, Chhattisgarh. He emphasised on the need of integration of Bhangi Community into Dalit movement . He feels major obstacle in not happening this is because of attachment of titles of slave mentality like Walmiki to them. He also visited the local Bhangi communities in Pune, and was inspired to see the changes as compared to other parts of India. 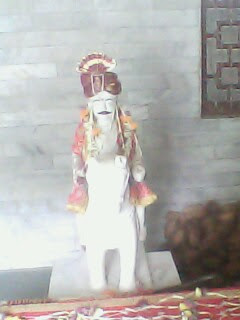 It was planned in the meeting that with ‘Manuski’, there will be an exchange and exposure programme of activists, meeting of successful people from Bhangi community and seminar of them in the month of April.
http://www.manuski.net/?m=200812
at December 16, 2008